ON Tuesday night this week it was hugely-experienced second-row forward Shaun Pick, once of Featherstone Rovers, Toronto Wolfpack, Sheffield Eagles and Batley Bulldogs.

As our new-look squad for the 2021 Betfred Championship season continues to take shape, we are pleased to announce that we have brought in not only seasoned professionals who know where they’re going, but also young rookies who are looking for a new challenge and in whom we have the belief that they can go places.

Tyler Dupree and Tom Brierley are two such up-and-coming younger players and now we have another in Ben Holcroft, our latest capture from the production line at Wigan Warriors.

He has signed a one-year contract and he plans to show that he can hack it in a senior environment on his next step up the ladder.

It will be a big leap out of my Wigan comfort zone, but I know John Hutchings and some of the other lads who are already at Oldham and that will help me to settle in. I’m really looking forward to being part of the Oldham squad and getting the chance to show what I can do.”

A Wiganer, like Hutchings, he first showed promise as a junior at Ince Rose Bridge, attracting the attention of Warriors in his early teens. He played at Wigan for several years, working his way through scholarship, academy and reserve-team rugby and playing in a strong Wigan side that beat arch rivals St Helens 22-10 in the 2019 Super League under-19s Grand Final at the D W Stadium.

He scored one of Wigan’s tries in a side that included two players who have recently jumped to prominence at Wigan — brilliant half-back Harry Smith, who’s tipped for the very top, and full-back Umyla Hanley, Ellery’s lad.

“I loved my years at Wigan, but it was time to move on and seek a new challenge and Oldham convinced me it was the club for me.

I played centre when I first went to Wigan on scholarship, but my coach at that time said he preferred me on the wing and I’ve been on the wing ever since.”

He’s a big lad for an outside back and he’ll be pushing for a wing spot. Occupancy of the wing positions is still up in the air at the moment and Ben will have just as much chance as anybody else.

He’s very strong with the ball coming out of backfield and that’s essential for a winger in the modern game.

If he works hard, adapts to the change and strives hard to reach personal goals as well as those of the team and the club he’ll do well, of that I have no doubt.” 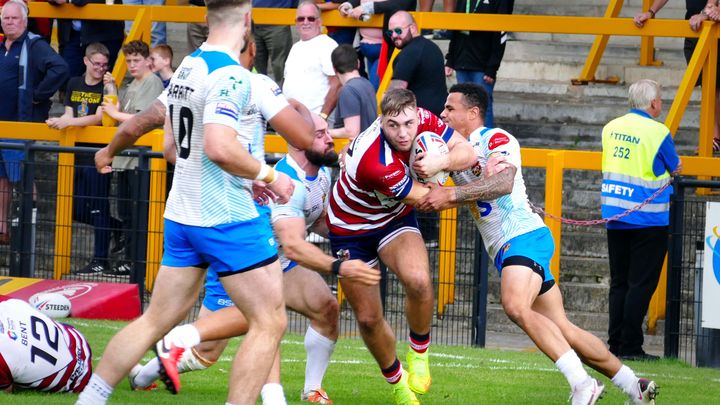 Ben Signs on again for another year

BEN Holcroft, one half of the centre-wing partnership that was the youngest in the Betfred Championship last season, has re-signed for another season at Oldham Rugby League Club

THE RFL has confirmed that Oldham will be one of the four Betfred Championship clubs to take part in the first round of the Challenge Cup in early March.
Our Partners