COURAGEOUS Ed Smith, the Oldham forward, has reluctantly called time on his rugby league career because of injury.

“It’s the right decision. We are 100 per cent behind him. We wish him well and he knows he will always be welcome back at Oldham,”

Roughyeds took a chance on the former York City Knights captain in January, 2019 when he was out of the game, out of contract, down on his luck in the sporting sense and striving to regain fitness after the reconstruction of his shattered left knee.

He had played 130 games for York, his home-town team, when in 2017 at the age of 24, he smashed his anterior cruciate ligament. After major surgery, and a while out of the game, the knee let him down again while holidaying on a beach.

He faced another lay-off and a second reconstruction, but by January, 2019 he was living in Salford after he had been relocated from York to Manchester in his full-time professional career in banking. Roughyeds learned that there was a quality player out of contract on their doorstep, albeit currently injured, and invited him to the club for treatment and rehab.

Unannounced, he spent nearly six months with the Roughyeds’ medical team before, on a red-letter day in July last year, he got the all-clear to play again and made his Oldham debut at London Skolars as a substitute in a tight win on the final push for promotion. He played only three games at the back end of that season, but he was offered, and accepted, new deals for this curtailed 2020 season and also for 2021.

He was hoping to be getting stronger by the day by now but after doing a lot of solo running away from the club he has been forced to admit defeat and accept that his playing days are over.

“My knee didn’t feel right and when I spoke to the surgeon he said the reconstruction graft looked thin and there was a high risk of arthritis in later life or the ACL (anterior cruciate ligament) failing for a third time.

“It was still a tough decision for me to make, but I’m sure it’s the right one. I have tried desperately hard to get to a position where I could play for a while longer, but it wasn’t to be.

“Things haven’t worked out, I’m afraid, but it wasn’t for want of trying. I did all I ever could do and the club was fantastic. I can’t thank the club enough for taking a chance on me and backing me when they invited me up nearly two years ago. I will forever be appreciative of that and I’m just sad that things haven’t worked out as we had hoped

“You reach a stage where you have to admit defeat. I can only repeat that I will seriously miss being part of the Roughyeds’ squad and club and I will be there next season urging on the boys as a fan.”

“Ed and I had a long chat when he came to tell me of his decision. It’s a sad situation because Ed has been at the club a long time (nearly two years) and he has worked incredibly hard to give himself a chance.

“Nobody could have worked harder, believe me, but to then get a back injury and another knee injury was nothing short of cruel.

”I’ll never forget how he played at London Skolars. It was his first game for two years, but in a tough. hard, demanding game his commitment and his enthusiasm were fantastic. We always knew we would have a quality player if we could get him fit and didn’t he prove it in that match.

“We all thought then that the chance we had taken on him would pay off handsomely, but it hasn’t worked out and that’s not the fault of Ed. He is an intelligent guy and he knows the score about risks; what’s worth chancing and what isn’t. He’s got to think of life after rugby and the risks he is taking.” 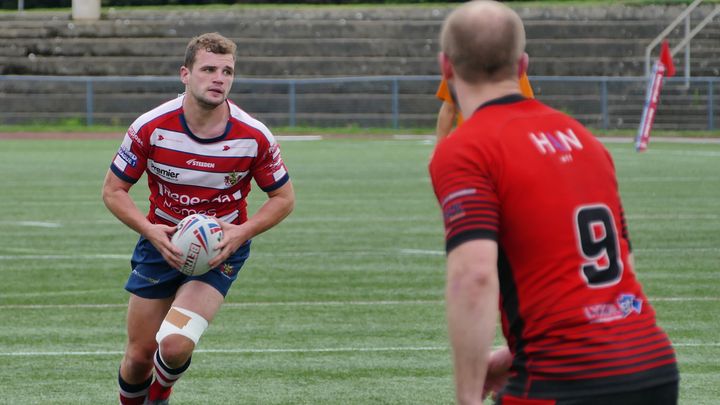 ROUGHYEDS are happy to confirm that unlucky Ed Smith will be back in the squad for the 2021 Championship season and determined to justify the faith the club invested in the former York City Knights captain when he faced a long haul back from injury in January, 2019.

OLDHAM Rugby League Club is “excited” (Matt Diskin’s words) by the signing for next season of Leigh Centurions and former Widnes Vikings winger Ryan Ince, who played two Betfred Championship games on loan for Roughyeds before the lockdown early this year.
Our Partners