THE current London Broncos squad is a perfect example for those expansionists who argue that there’s latent rugby league talent to be found all over the country — not just in Lancashire, Yorkshire and Cumbria.

There was once a time when the London team was full of Australian imports. No more. Take away Chris Hankinson, Jarrod Sammut, Greg Richards, Rhys Curran and Abbas Miski and most of the Broncos who will be on show at Bower Fold tomorrow (Sunday) were born in the UK, south of Watford Gap.

Eleven of the 19 named so far by caretaker boss Tom Tsang (Huddersfield born and head coach at Coventry Bears for eight years before moving south to the capital), are 24 or under and many of them come from Surrey, Hertfordshire, Essex and Kent.

There are also two from Northamptonshire, one from Shropshire, one from Birmingham and one from Middlesbrough, but gone are the days when London relied over-heavily on Down Under imports or players from the Northern heartlands who liked the idea of sampling the bright lights.

Oldham v London has always been North v South, but that’s a genuine description now when our lads, all northerners from Lancashire or Yorkshire, will be flying the flag for the region where rugby league was born.

London bring a very similar squad to the one that beat York City Knights 50-22 in their last game three weeks ago.

They’re a youthful outfit without the experience of Cory Aston, Matt Fozard or Frenchman Romain Navarrete and with an average age of 22 if you don’t count their 34-year-old, multi-skilled half-back Jarrod Sammut.

Leeds-born Danny Ward upped and left them as head coach round about the time that Matt Diskin and Roughyeds parted company so in that respect both teams have had to get used to new men at the helm, Brian McDermott at Oldham, Tom Tsang down there.

Few know more than Brian Mac about rugby league in London and the Home Counties although a lot of water has run through the Thames since our new coaching consultant was in charge at the old Harlequins RL Club.

Like everyone else, though, he’ll know that Sammut will be a constant threat; that Chris Hankinson is a polished centre who can bring out the best in his Wigan-bound winger Abbas Miski, whose 13 tries this season place him third in the list of Championship try scorers.

In his last six games against Roughyeds – three for Workington, three for Broncos — Sammut has scored at least one try in every outing, nine in total;  a danger man who needs to be put under pressure and made to feel his age.

Roughyeds haven’t beaten the Londoners since 1985, but that will mean absolutely nothing to McDermott, who is delighted with the response of his “men” to his methods, systems and structures.

He will be looking for stronger defence out wide and better use of the ball to create more tries as Roughyeds bid to become the fourth side to overturn Broncos this season, behind Halifax, Featherstone and Bradford.

Bottom club Swinton Lions, who have lost all 14 of their league games so far, have parted company with head coach Stuart Littler.

Assistant coach Allan Coleman has agreed to look after the first  team until the end of the season when the position will be reviewed.

Roughyeds play the Lions at Heywood Road next Sunday, August 8. 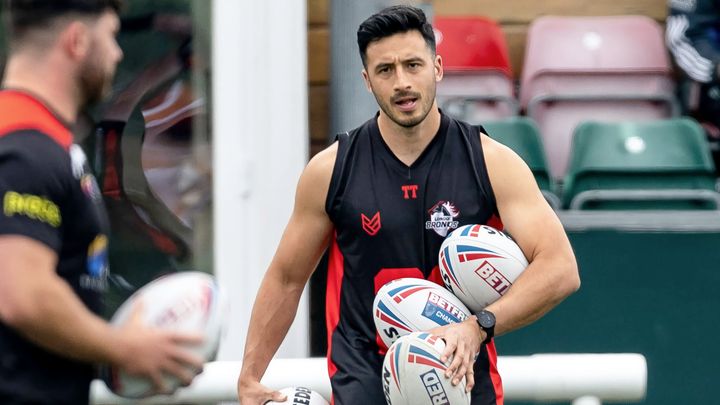 Broncos 'fired up and ready' — Tsang