Club skipper Gareth Owen has missed three of the club’s last five Betfred Championship games with a painful back injury and when he isn’t there, ‘Langers’ takes over as leader at a time when Roughyeds are battling every inch of the way for Championship survival under new team boss Brian McDermott.

Long-serving Langtree, who’s been at the club for nearly a decade, has always shone as a try-scoring second-rower, but he’s now leading by example on defence.

A marked man with the ball in his grasp, he hasn’t scored for the past six games, but he’s tightened up his defence to such an extent that he spectacularly made numerous ‘big hits’ in last Sunday’s inspirational team performance, setting the lead for his team mates, whose energy and enthusiasm in defence was outstanding.

After a spell on the left, he’s also been reinstated as the wide-running forward on the right – his preferred side of the field and the one where he has played for most of his 188 games in the Oldham shirt.

He’s seven tries short of his 100, but right now it’s his tackling that’s catching the eye as Oldham prepare for their big game this Sunday (3pm) at bottom-club Swinton Lions.

The battle of the bottom two is sure to be a humdinger, with the Lions having won their first league game of the season at Dewsbury Rams last week under new coach Allan Coleman and Roughyeds having given the full-timers of London Broncos the fight of their lives in a 30-20 loss.

Replacing Langtree as No 1 strike forward is Tyler Dupree, who’s scored a try in each of the last four games against Dewsbury, Bradford, Whitehaven and Broncos.

He also scored in each of the Oldham-Swinton derby games at the start of the season, which ended with a 23-14 win for the Lions at Heywood Road in the Betfred Challenge Cup and a 28-20 home win for Oldham in the Championship a few days later.

With six tries over the season so far, Dupree tops the Oldham list, ahead of winger Tommy Brierley (5) and forwards Langtree and Martyn Reilly, each with four. 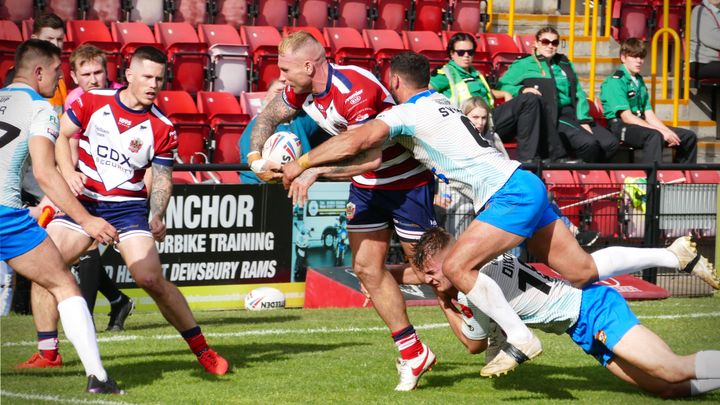 PROMOTED Barrow Raiders, who will be in the Betfred Championship next season, have confirmed the signing of our long-serving, popular and record forward try scorer, Danny Langtree