Late drop goal condemns us to another loss

HARRY Tyson-Wilson’s drop goal four minutes from the end made the game safe for Sheffield Eagles as we battled for at least a draw when trailing 24-18 for a large part of the second half at The Keepmoat Stadium in Doncaster.

We went close to squaring things up a few times, but the loss through injury of first Fenton Rogers and then James Barran did us no favours and the Covid-hit Eagles kept us at bay with strong defence and then went to the other end of the field where the home half-back delivered his one-point coup de grace.

Both teams made several forced changes.

Because of Covid-related cancellations, Eagles went into the game after having had two weekends off and after suffering yet another outbreak on the morning of this match.

Aaron Brown moved from loose-forward to stand-off where he was partnered by Tyson-Wilson in a new half-back combination to replace the absent Izaak Farrell and Anthony Thackeray.

Captain Matt James moved from prop to loose-forward, while in the backs centre James Glover replaced Ryan Johnson, who started on the bench. Joe Farrell was replaced by Ewan Hodgson in the second-row.

Changes from last week in the Oldham backs saw on-loan Lloyd Roby, from Widnes, move from replacement bench to left-centre where he played inside a former Vikings colleague in Ryan Ince. Max Roberts, who has played in all 17 games so far in cup and league, switched from left to right centre and Joe Hartley stood down to allow it to happen.

In the forwards, Liam Kirk (concussion) and Danny Bridge, who was ill, were out, while Jamie Abram made way for the return after injury of club captain Gareth Owen. Phil Joy was back at prop, the pack starting off with three big front-rowers in Joy, Luke Nelmes and in-form Tyler Dupree, with Danny Langtree and Shaun Pick operating a little bit further out.

Bench spots were occupied by Liam Bent, Martyn Reilly and new boys Fenton Rogers, a huge, young prop who was 18 last week, and Brad Jinks, a talented hooker just out of his teens, who was at Waterhead after leaving the Peach Road club to spend four years at Castleford Tigers.

Both Rogers, on loan from Huddersfield Giants, and Jinks, whose exciting dummy-half break was instrumental in Roughyeds equalising at 12-12 just before half-time, got a fair bit of game time and showed up well — quality young players who clearly enjoyed going up against seasoned Championship forwards and came out of it all the better for the experience.

Indeed, Rogers got himself sin-binned early in the second-half and it was while he was off that home hooker James Davey found a gap down the Roughyeds left edge to sail through it and put supporting full-back John Guzdek under the posts for a 24-12 lead.

Oldham got the first two penalties of the game, but it was nip and tuck at either end before Roughyeds went in front midway through the first half.

Joy and Nelmes were stopped just short before Owen worked the run-around and then sent Danny Langtree crashing in for a try which Dan Abram goaled with a low trajectory kick on the angle.

It was time to consolidate and build on that, but the ball was lost in the second tackle after the restart kick and in the next set Eagles drew level when James went in after strong work by the Eagles forwards.

A few minutes later the home side went in front, this time on the back of a penalty for offside. A misunderstanding or a wrong ‘read’ in the Roughyeds’ goal-line defensive line left a massive gap, through which Oliver Davies sailed home without a finger laid upon him.

Trailing 12-6 as half-time approached, Roughyeds needed to score before going in for the break.

Brian McDermott sent on Jinks and Reilly and after Roughyeds had halted big Scott Wheeldon against a post, they immediately went to the other end where Jinks made a long, scorching break before Reilly crashed under the posts for Abram to goal. Game on, 12-12, half-time.

We were waiting for the forwards to go set for set at the start of the second half, but it wasn’t to be. Straight from Oldham’s restart kick, home centre John Glover breached our defensive line and sent his winger Ryan Millar on a scoring gallop from halfway to finish under the posts.

The game was then held up for ten minutes while home prop Tyler Dickinson was attended to by physios and other medics after taking a heavy knock. Eventually, he was carried off on a stretcher.

Soon afterwards, after Jinks had gone off hurt, Davey did what Glover had done earlier by beating off a challenge, finding a gap and going clear to send his full-back Guzdek over for the Eagles fourth and final try, which he also converted from in front.

The game looked to have gone away from Roughyeds, but big Tyler Dupree still had the strength, energy and speed to pop up out wide in the left-centre slot, pull out of a tackle and then pin back his ears and go for the line.

Abram again goaled to make it three out of three with 20 minutes to go and only six points in arrears, but the home defence held firm before slotting over the all-important drop goal.

Roby, Jinks, Rogers all in our 21 man squad
Toulouse here on Sunday — and it's FREE for under-16s 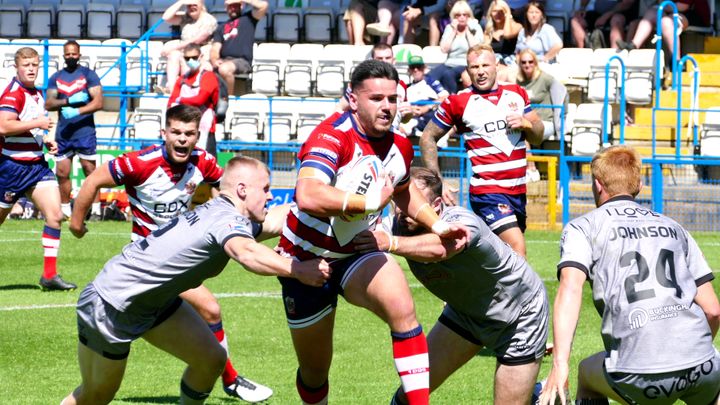 Eagles capitalise on our mistakes to win narrowly

AFTER only one game on loan to Oldham, highly-rated young centre or wing Louis Senior has gone back to his Super League parent club Huddersfield Giants where several players have tested positive for Covid.
Our Partners