NO way did we deserve to lose this one. It ended Oldham 20, London Broncos 30, but even the most partisan Broncos fan would have to admit that Oldham didn’t deserve to lose after spending only five minutes out of the 80 in arrears.

It was a heartbreaking finale for the Roughyeds boys, who led 20-16 as this thriller edged into its final five minutes and looked to be heading for the win they had worked so hard for.

In fact, we led 20-12 with only ten minutes remaining. We were three tries to two to the good, with Ryan Ince having scored in the first half to give us an 8-6 interval lead.

Tyler Dupree and then Martyn Reilly crossed in the second half, either side of a try in the corner by Abbas Miski, and with a 20-12 lead we were in control and looking good.

It was after Dupree’s try five minutes into the second half, goaled by Dan Abram for a 14-6 lead, that Broncos boss Tom Tsang introduced Jarrod Sammut from the bench.

We kept the maverick magician relatively quiet for 25 minutes, but in the end, with the clock ticking down, he produced a 40-20 that led directly to left-winger Miski’s second try and then broke up the middle to score the winner himself and break Oldham hearts, as he has done so often in the past.

In actual fact it still needed Chris Hankinson’s conversion to give London the lead for the first time in the 75th minute, but it was a formality from in front of the posts.

After that they scored again from dummy half when hooker Jacob Jones went in from dummy half. Hankinson goaled and then added a penalty after the final siren to provide a lop-sided result which in no way reflected our battling performance — a credit to all concerned and one which gave London’s full-time professionals the fright of their lives.

Sport can be cruel — just ask any of those Oldham fans who witnessed this one.

One has to acknowledge Sammut’s skill and individual brilliance in taking matters into his own hands with the game drifting away from his side, but Oldham didn’t deserve to be on the receiving end after proving once more that, with Brian McDermott in charge, they are more than capable of taking their relegation fight down to the wire.

Hiding his obvious disappointment at the result, but glowing with pride at how his men had performed, McDermott said:

“We are making progress and I see this as another step forward.

“I thought it was a really good performance which indicated that we are getting to grips with some of the things I’m trying to put into place.”

It was nip and tuck for the first 20 minutes, Broncos having won the toss and chosen to play uphill in the first half.

We took the lead in the 20th minute with a great try, engineered and finished by the backs.

James Barran made a half break through heavy traffic and found the perfect ball which gave winger Tommy Brierley the opportunity to make exciting ground before, with one hand, putting the ball back inside to centre Ryan Ince, who had a clear run to the line.

It was a great try which Dan Abram converted and then added a penalty soon afterwards following a late tackle on Barran after he had put in a kick.

We were well worthy of our 8-0 lead, playing with spirit and highly-commendable enthusiasm and vigour.

A team like Broncos would always have a spell in the ascendancy, however and it came in the run-up to half-time when they applied a lot of pressure that finally produced points when loose-forward Josh Walters crashed over.

Hankinson goaled and we led 8-6 at the break, but not before Dan Abram caused Broncos problems down the left and Jamie Abram was held on the line after trying to squeeze over from dummy half on the right.

Our enthusiasm was again evident in the first play of the second half when we got players into the tackle and pushed Broncos over the touchline, but we were penalised for not doing it legally.

Still, our defence was strong and after the dangerous Miski was well held at the end of a set we got one of four penalties in a row which again put Broncos on the back foot.

It was our turn now to turn the screw and it came after a lot of pressure when Dupree turned in a two-man tackle on the London line and got the ball down. Abram’s goal gave us that 14-6 lead, at which point Sammut made his entry off the bench and Hankinson reverted to his normal position in the centre.

Initially, the London change made little difference. Oldham’s fired-up forwards were in charge and going for the jugular. A try at that stage would have put us three scores clear and we twice went desperately close, first when Reilly was held up over the line and then when Jamie Abram scooted from dummy half and reached to touch down.

Did he have downward pressure, or did he lose his grip on the ball in the act of touching down ?

The decision favoured the latter and then to make matters worse Broncos immediately went on the counter and Miski went in at the corner after good, attacking rugby in which influential half-back James Meadows was to the fore, as he often was when Broncos had the ball. Hankinson’s touchline goal cut our lead to 14-2 whereupon Sammut began to take charge and we had to defend brilliantly.

Reilly again went close when we got down to the other end and with the game passing through an end-to-end spell in which both sides were looking for the upper hand, big Mac left his seat in the stand to appear on the touchline.

Reilly responded magnificently, pulling out of an initial tackle near the Broncos line and then bursting across the face of goal to find the gap, go in and to slam the ball down. No mistake about that one.

Abram goaled again and with quarter of an hour left we were eight points ahead at 20-12.

Five minutes later we still led by eight when Sammut found a crucial 40/20 on the right which led directly to Miski’s second try in the left-hand corner.

Hankinson’s kick passed wide — you knew that as soon as it left his boot from the reaction of Oldham fans grouped behind the posts — but Broncos were only four points down now and that provided Sammut with a challenge he couldn’t resist.

He came off the bench because he was urgently needed and he finally came up trumps when he burst clear in midfield, turned on the afterburners and dived under the posts to provide Hankinson with the easy goal that gave London the lead for the first time.

Everything was academic after that, with only minutes left, and it was all over when Jacob Jones got over from dummy half.

Hankinson goaled and then added a penalty after the hooter had gone to produce a 30-20 scoreline that in no way reflected Oldham’s terrific contribution to a stunning game. 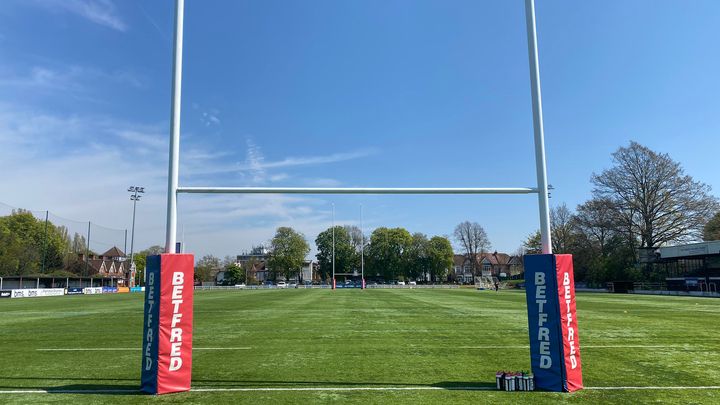 Brave Roughyeds Battle to the End

To beat full-time Broncos in London with a full-strength side would have been a tall order. To win there without SEVEN senior players and you’ve got to plant a flag on top of a rugby league Everest

IT’S ‘as you were’ at Oldham Rugby League Club where Brian McDermott has named an unchanged 21-man squad for Sunday’s clash with the full-time professionals of London Broncos at Bower Fold (3pm kick-off).
Our Partners