IT wasn’t the win we wanted in our last home game of the season, but if nothing else we closed the Bower Fold book on this 2021 Betfred Championship campaign with a four-try flourish which included our best individual touchdown of the year from Tyler Dupree.

Newcastle Thunder won a typical end-of-season game 38-24 by scoring seven tries to five, but it was still a fitting Bower Fold farewell for club captain Gareth Owen, who will retire after the last game at Dewsbury Rams.

Having played in 153 Roughyeds games in seven and a half seasons with his home-town club, five of them as club and team captain, Gareth deserved a fitting send-off and although he would have liked a win more than anything, he played much longer minutes than usual, had a good game, provided an excellent service from dummy half, made the crucial break that allowed Danny Bridge to send in centre Max Roberts for his second try and got a great reception from our fans, his fans.

Another defeat in this relegation year was disappointing, of course it was, but the players did their level best to give supporters an enjoyable afternoon and apart from their lapses and loss of energy and defensive determination in the game’s third quarter after half-time they generally succeeded.

Thunder’s talented squad, even without hooker Bob Beswick, centre Matty Wright and full-back Calum Turner, raced in for five of their seven tries in less than quarter of an hour in the second half when we had use of the slope and had hoped to score first after going into the half-time break 12-6 down.

Take away that bad spell and there was little to choose, if anything, between the sides.

Our changes, most of them positional, saw Tommy Brierley at full-back, Dan Abram on the wing, Dupree and Danny Bridge as the starting props and Brad Jinks at loose-forward.

We won the toss, elected to play up the slope and started off like a house on fire.

Lewis Charnock scored in the second minute after Alex Donaghy failed to hold a high kick after a superbly-timed tackle.Abram added the goal.

Then Owen worked the run-around with Danny Langtree, which opened up some space for the hard-working Ryan Ince to go close to adding another try.

He was pulled down just short and lost the ball as he stretched for the line.

With half-backs Jake Shorrocks and Josh Woods finally getting their hands on the ball more, Thunder started to get on top slightly and they scored twice before half-time through Woods and Ukuma Ta’ai. Both tries were converted by Woods and Thunder led 12-6 at half-time.

Playing down the slope, we needed to score first but man of the match Woods took matters into his own hands and produced the perfect cross-kick for Connor Bailey to go up, collect and drop over the line.

The restart kick went straight out on the full and, direct from the penalty at half way, man-of-the-match Woods produced the perfect little grubber-kick into our in-goal area for Keiran Gill to score.

Rookie centre Isaac Nokes went in next before full-back Donaghy scored twice in four minutes, his second try the direct result of a clean break by Woods, who also kicked the goal to give Thunder a 38-6 lead with quarter of the game still to go.

With Dupree in devastating form and looking to be enjoying every minute of it, Roughyeds clawed their way back and responded with 18 unanswered points to give home fans something to take away with them for the winter.

He was twice held up over the visitors line — once after crashing into a goal post — and the pressure paid off at the back end of some great attacking rugby when winger Dan Abram went low for the corner as the cover closed and scored a lovely try.

In the build-up to it, Harvey Spencer, Lewis Charnock, Tommy Brierley joining the line from full-back and centre Ryan Ince all handled sweetly and Abram finished well in the corner with plenty to do to get there. Charnock took the kick off the touchline and failed narrowly to add the extras.

Trailing 10-38, Oldham kept up the momentum and then came that Dupree special. Taking the ball deep inside his own half, he crashed into the clear, sent two or three defenders scattering, looked for support and then decided to go it alone, cutting in for the posts and just doing enough to fend off full-back Donaghy before diving in.

Roughyeds still weren’t finished. They were well on top now and when Martyn Reilly send Max Roberts racing away to the corner to score his side’s fourth try, fans began to sense there was still enough time to snatch a win with 13 minutes on the clock.

A penalty should have kept up the home pressure, but the kick failed to find touch and Thunder could breath again – not for long though.

Owen’s break did more damage and Bridge was on hand to send Roberts in at the corner again.

Time ran out on the Roughyeds, but so dominant were we in that final 20 minutes that Thunder were hugely relieved to hear the hooter. 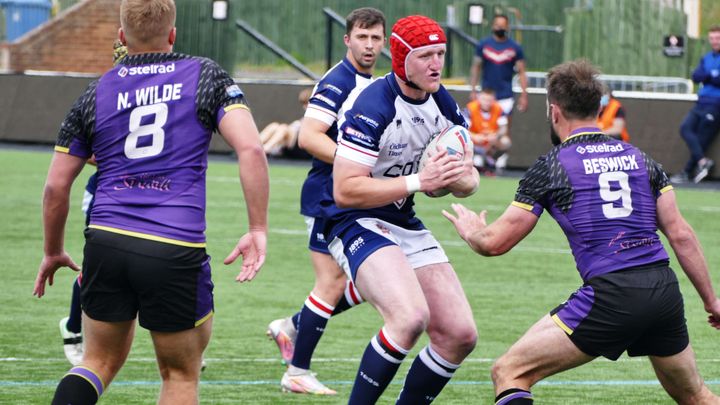 Another difficult day at the office

ROUGHYEDS suffered another difficult day at the office when beaten 40-6 at Newcastle Thunder, who scored seven tries — five of them by their classy backs

PROP Liam Kirk, who has missed the last four games with a head injury (concussion), is back in the Roughyeds’ 21-man squad for Sunday’s last home game of the season against Newcastle Thunder at Bower Fold (3pm)

NEWCASTLE Thunder have made a change in their 21-man squad for Sunday’s Betfred Championship game against Roughyeds at Kingston Park (3pm), calling up young centre Isaac Nokes
Our Partners