AFTER their huge defeat at Whitehaven last week, Widnes Vikings brought back centre Steve Tyrer, hooker Lewis Hulme, second-row Shane Grady and loose-forward Matty Smith against Oldham and were a much stronger side in providing the perfect response to their Cumbrian nightmare.

This time it was Oldham’s turn to be on the receiving end, Vikings scoring the same number of tries as they conceded at the Recreation Ground seven days earlier . . . 11.

These are indeed strange days!

Our early tackling and general defensive work wasn’t up to scratch and well though Widnes played, with forward domination provided by second-row pair Adam Lawton and Shane Grady, and midfield creativity coming from Danny Craven, Matty Smith and Joe Lyons, they will be the first to concede that their opponents weren’t at their best.

Tommy Brierley was back on the Roughyeds' right wing and a reshuffle saw centre Max Roberts move into the second-row with Danny Langtree and Martyn Reilly taking the loose-forward job with Danny Bridge and Liam Bent on the bench with Dec Gregory and Lewis Charnock.

Roughyeds kicked off and Widnes ended the first set of the game with a try by Lawton after a kick by Smith rebounded off a clutch of arms into space and bounced nicely for the home second-row man.

Tries for the home side came quickly after that with Olly Brookes, Shane Grady, Deon Cross and Brookes again all crossing the Roughyeds line before we scored our only try near half time.

Danny Bridge, Dave Hewitt, Harvey Spence and Ryan Ince all handled swiftly in a smart right to left shift and Ben Holcroft had a free run to the corner for a try which Dan Abram failed to improve.

Widnes replied before the interval when big Adam Lawton crashed in for his second try and a 32-4 interval lead.

Early in the second half a promising Oldham raid broke down and Widnes replied when full-back Jack Owens went up the middle to create a try for Connor Aspey.

Further converted tries by Cross and Tyrer made it 62-4 and that, coupled with Dewsbury’s 24-20 win at Sheffield means relegation to League One for Roughyeds now looks a certainty. 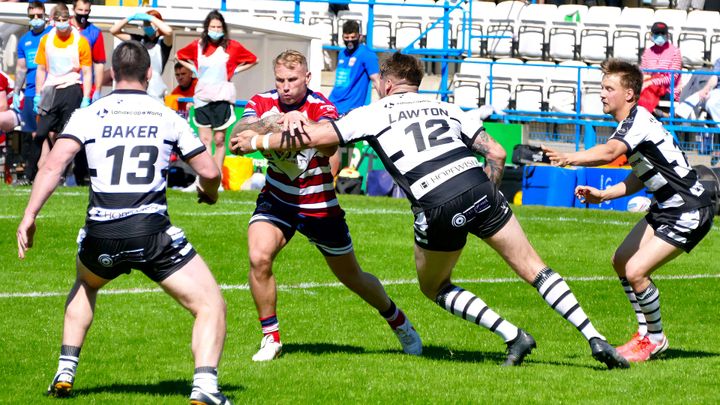 TICKETS for our return to Bower Fold on Sunday, after two games on the road, are now on sale online.