“Firstly, I want to congratulate Lock Lane on what was a deserved victory - no question about that. We wish them well in the next round.

“However, on behalf of the club I want to say sorry to our fans and sponsors for what was an embarrassing night for us.

“It was a bitterly disappointing night for the club, and for me personally, both on and off the pitch.

“On it, we failed to show the desire that is a pre requisite in any game and we ultimately paid the price. For the wrong reasons, we created a little bit of club history.

“Off the field, the problems with the floodlights, for the second game in a row, was the last thing we needed, especially in front of a live audience, both at the ground and via OuRLeague.

“I have already apologised, last night, to Ralph Rimmer, the Chief Executive of the Rugby Football League on the club’s behalf.

“After the Wakefield game, when we experienced similar problems, we took action based on what Avro had told us had caused the issue, but given that it happened again last night there’s clearly another problem. We will obviously follow this up again, given the recurring problem last night.

“What this does highlight, once again, is the massive issue that not having a ground of our own causes. For 25 years now we have battled against this problem and continue to do so. It is incredibly hard to move forward when, ultimately, we are not in control of our own destiny. Fans can rest assured that this is something we continue to work on to try and rectify and that will not change.

“A lot of hard work has gone into pre-season, with what is primarily a brand-new squad, and sadly, a lot of the optimism generated will have been dented last night. That is something the players have to take responsibility for because it is they who take the field.

“As Chairman I will continue to work as hard as ever and in Stu Littler we have a coach who cares very much about what happens and, like us all, is hurting right now.

“We are not naive enough to think this one game will define our season and in some ways it will be used as additional motivation by us, collectively, to ensure that, come the start of the league season in March, we are as well prepared as we can be.

Once again sorry, but please keep up your great support.” 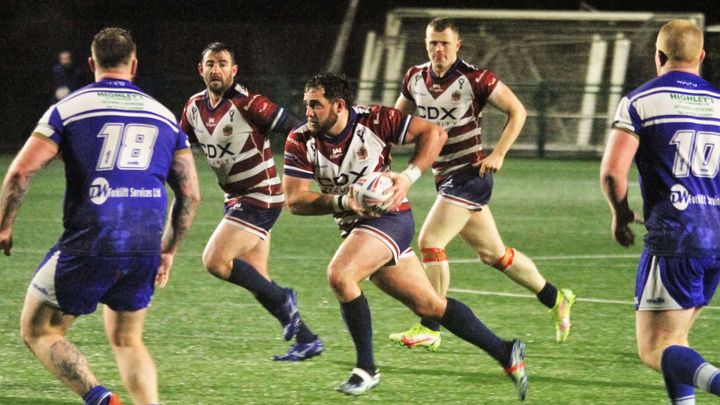 OUR interest in the 2022 Betfred Challenge Cup is over, beaten 22-12 by Lock Lane, but we have nearly two months now in which to get ready for the start of the Betfred League One season when Keighley Cougars come to the Vestacare Stadium on March 27

Riddy closes in on 2500 points

WITH at least three more games to play this season – the final number depends on whether we make the play-offs – our hugely-experienced captain, stand-off, goalkicker and master craftsman Martyn Ridyard needs only 17 more points to reach the magnificent total of 2,500 in his long career.
Our Partners