There’s a local angle in there because Matty Lees was brought up in Newhey, where his parents still live, and his Dad supports us as a member of our Club Cash lottery.

Matty played his early rugby at Mayfield, then signed for Bradford Academy before transferring to St Helens Academy where he has progressed through the ranks.

The Saints trio have been in outstanding form for their club in 2022, with forwards Batchelor and Lees, and versatile back Welsby propelling their side to the Betfred Super League summit, while Wardle came within minutes of Challenge Cup Final glory with the Giants whose league form also continues to impress.

Hull KR’s Hall was one of England’s best players at RWLC2013, the-then Leeds Rhinos winger scoring eight tries in five matches to earn a place in the international team of the year.

Catalans Dragons hooker Michael McIlorum is another veteran of the 2013 campaign, which ended in semi-final defeat to New Zealand at Wembley Stadium. His Dragons teammate McMeeken and Salford Red Devils’ Watkins last appeared for England at RLWC2017, where Watkins came agonisingly close to stunning Australia in the dying stages of a titanic World Cup Final clash in Brisbane.

Nine of the Betfred Super League’s 12 clubs are represented in the team. Players from Australia’s NRL competition were unavailable for selection.

“This is the start of the World Cup as far as I’m concerned. This game is as important as the Fiji game, which is just before the World Cup starts.

“First and foremost, I want to win. Ellery will have his team very motivated and we need to be better than them. It’s simple.

“I’ve picked a group of players who in my heart I know can do the job. Some are new to the set up; others like Ryan Hall are very experienced and are still performing at a high level.

“I’ve made the call on George Williams who, on his day, is one of the best in the world. If it doesn’t work out, it’s on me as head coach.

“Our preparation has been excellent, the players have been superb in training and there’s a good spirit in camp.”

The All Stars fixture revives a Rugby League tradition which stretches back to the Other Nationalities team of the early 20th century, with the team made up of players from across the Rugby League world who are currently playing in the northern hemisphere.

England versus the Combined Nations All Stars is part of a double-header which also sees England Women taking on France. Tickets for the Men’s and Women’s double-header at the Halliwell Jones Stadium are available to buy now from only £20 Adults and £10 Under 16s at eticketing.co.uk/rugbyleague

All online ticket sales are now for collection on the day only, which will be from the Ticket Office (to the left of stadium reception) that will open from 12 Noon on matchday, with gates opening at 2.15pm. Matchday sales will also be available at the Ticket Office from £20 Adults and £10 U16s.

The England teams’ jerseys, plus those of the Combined Nations All Stars, will have a strong Tongan flavour with 10% of all shirt sales going to the ongoing recovery efforts in Tonga following the volcano and tsunami earlier this year. Tonga-inspired mid-season internationals shirts are available to buy at eliteprosports.co.uk 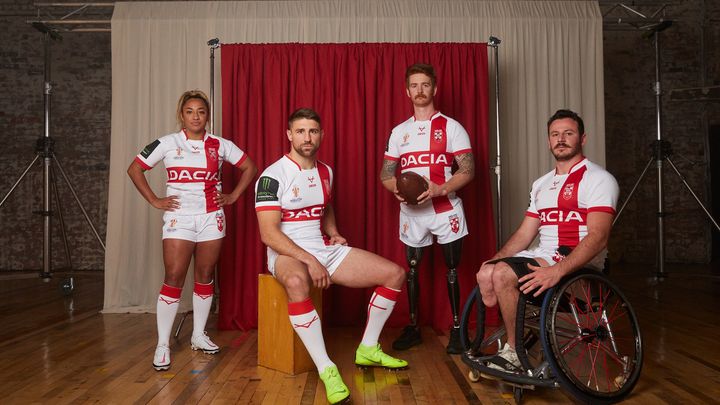 England Rugby League today reveals the kit to be worn by the Men’s, Women’s and Wheelchair sides in this year’s World Cup

OWEN Restall, our full-back with the golden touch when it comes to scoring tries, is still in line to win his first Welsh cap this week-end, still in with a shout after John Kear trimmed his squad from 30 to 21 for Sunday’s Test against France in Albi.
Our Partners