Massive effort but another loss

WE were unable to capitalise on Hunslet’s shock home defeat by Midlands Hurricanes on Friday night when we were beaten 29-16 by high-flying North Wales Crusaders at the Vestacare Stadium.

We led 10-8 at half-time, but Crusaders took only three minutes to regain the lead at the start of the second half, after which they never looked back.

They didn’t do anything special, but they have got where they are, second place, by doing the basics right and playing power rugby on the back of their huge physique.

They tackled hard, ran even harder, and got so much on top in the forwards that we fell away in the second half when we started to make the sort of basic errors that no side can afford to make against bigger, stronger and more experienced campaigners.

He also had, at stand-off, Reece Briers, the son of Lee, a legend of our sport, both when he was a player and now as a top coach.

Lee was a face in the crowd to watch his boy’s tactical kicking play a crucial part in Cru’s fifth win in a row, although the cross-wind twice carried his high kicks out on the full in the second half.

Cru went close in the first few minutes when Rob Massam was denied in the corner, but we hit back superbly thanks first to Kian Morgan’s strong defence on our left and then to his superb counter attack and clever inside kick for winger Joe Hartley.

Joe was stopped just short, but with the visitors’ defence all over the place, Owen Restall sold a dummy and crossed for a top-drawer try which Dave Hewitt converted for a 6-0 lead.

Three successive penalties and a six-again gave North Wales the possession and the territorial foothold to put us under intense pressure.

Cru began to assert their authority when right-wing Pat Ah Van was given a walk-in at the corner for an 8-6 lead, but two long-range penalty goals by Hewitt, the first for off-side, the second for a ball-steal from James Thornton , gave Roughyeds a 10-8 interval lead.

We failed to maintain those standards in the second-half, however, and mistakes with the ball led directly to quick Cru tries by Brad Billsborough and then by Reece Briers, the first one converted by Johnson.

Trailing 10-18, and visibly losing the ruck, Roughyeds were having to do too much tackling, but we never stopped trying and twice forced Cru drops-out before big Chris Barratt charged into the clear to score a fifth Crusaders try, which Johnson improved.

In the last few minutes Cru rammed home their advantage when Massam scored in the corner, but before Briers added a drop goal there followed a magnificent solo try by Loan Astley, who danced spectacularly through the visitors’ defence and then rounded the floundering Johnson to go over near the posts and bring the house down. Chewy kicked his fourth goal from four attempts.

“The game was there to be won, but we started making mistakes in the second-half. Crusaders completed at 97 per cent in the second-half and that, coupled with the way we invited trouble on ourselves, allowed them to punish us.” 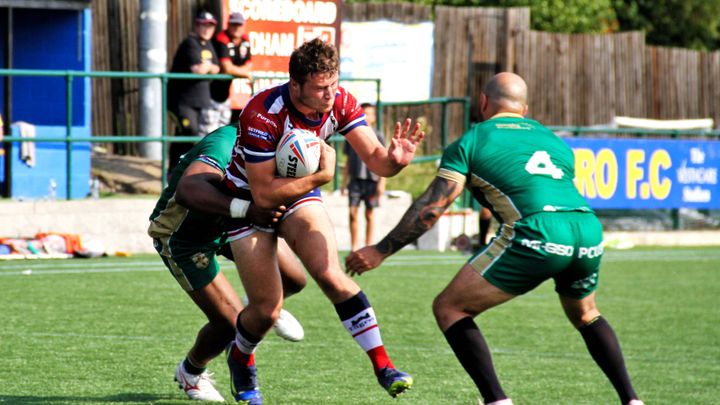 Roughyeds dazzle in the sun

THE prospects of a play-off decider when Hunslet come to the Vestacare Stadium on September 4 moved a step nearer when Roughyeds caned London Skolars 60-6 while runaway leaders Keighley were beating Alan Kilshaw’s men 60-18.

Back in 7th place after a high-scoring win

HAVING lost the position just outside the Betfred League One play-offs thanks to the big London Skolars win against West Wales Raiders on Saturday, we regained it with a 41-36 victory at Midlands Hurricanes where we also cut Hunslet’s lead on us to six points, each with four to play. 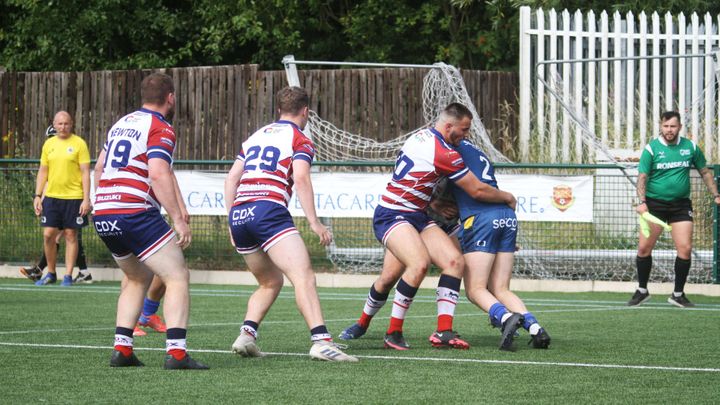 LOSING 46-0 at half-time, Roughyeds did much better in the second half before finishing on the wrong end of a 64-12 scoreline against in-form Doncaster at the Vestacare Stadium.

Title favourites turn on the style

WHEN your opponents have the likes of Eddy Pettybourne and Scott Murrell on the bench, you know you’re up against a side that’s moving up in the world and moving fast.
Our Partners